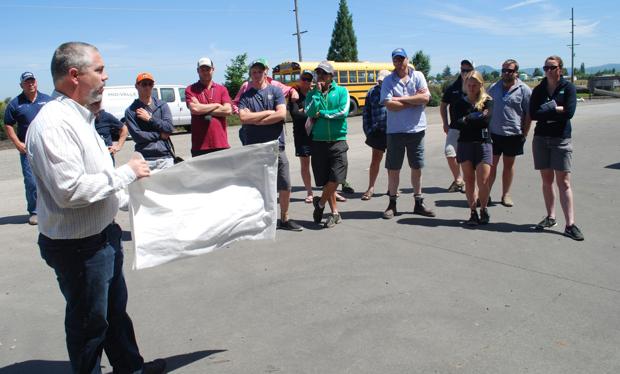 Seventeen young farmers from New Zealand and Australia toured mid-valley farms and agribusinesses Wednesday, hoping to pick up pointers to use in their own farm and ranch operations.

The group, composed primarily of members of the Foundation for Arable Research (FAR) in Templeton, New Zealand, will spend three weeks in the United States with stops in Oregon, Iowa, Illinois, Kentucky, and North and South Carolina.

The mid-valley tour was arranged by Halsey farmer James VanLeeuwen, who has made numerous ag-related trips to New Zealand over the years.

“The goal is to get them learning,” said FAR research manager Richard Chynoweth. “They really wanted to come to the States. We hope this helps upscale them and give them the confidence needed to grow their operations.”

According to Chynoweth, although similar crops are grown in Oregon and New Zealand, including wheat and grass seed, farms are much smaller in New Zealand.

The group arrived in Portland on Saturday and has been winding its way to the mid-valley, spending time in Amity and Silverton en route.

Felicity Mason, 31, lives on a 6,000-acre farm and ranch in Tasmania.   She hopes to learn how American farmers can make larger, more expensive equipment work financially.

“We raise sheep and beef cows, plus some crops,” she said. “I’m interested in the economies of scale. How you can tie up so much money in equipment and make it work?”

Mason is touring on her own and connected with the FAR tour through VanLeeuwen.

“I’m really interested in field tilling,” she said. “I want to stay long enough to see some of the harvest, and then I’m meeting a friend and we’re going to tour central and eastern Oregon.”

Mason is also impressed that although farms here are larger in scale, they’re still primarily owned by families, not out-of-state corporations.

“That’s not always an easy thing to do,” she said.

Craig Clucas, 29, farms about 400 acres and raises rye, wheat, barley and kale that is used to feed dairy cattle. “We have a few sheep, too,” he said.

The Templeton area, which is near Christchurch, gets about 30 inches of rain annually and some crops are irrigated, much like the mid-valley.

Stephen Blain and Tom Copland, both 27, said they were enjoying their visit, but said their farming area is much smaller than the Willamette Valley’s.

Blain said 2,000 acres would be a big farming operation in his area of New Zealand.