As all of you know, the seed labs have also had to scramble to face the new normal. Admittedly, it is nice to be considered ‘essential’ after all these years of being the necessary evil of the seed industry, but it came with challenges for sure. Face coverings and six feet do not make for efficient seed testing!

Our project this year was a coated clover germination. Although most clovers are in the rules, this one is not, and the fact that it was coated raised some questions about methods vs. quality. We had 10 labs in Oregon and Washington participate. There were high abnormals in the two lots we chose. First, we all used our own in-house methods. Our results were all over the place. The spread between the highest and lowest was 20 points in one lot and 33 points in the second lot. Not so uniform between the labs! Several interesting things were done, de-coating, different media, different day to final, prechill and different temperatures.

The second time we asked that all labs follow the same protocol. Taking the most often used methods, we asked that the labs use blotters, most comments had been that more moisture helped with breaking down the coating material. We used 20C for the constant temperature; ISTA recommends this temperature as well. We asked for a 10-day final count, instead of 7-day like most clovers. Our results were much better between the labs with a 5-point spread with the first lot and a 6-point spread with the second lot. I think all labs learned a lot in this process.

The other hands-on we did as a group was examining hemp seedlings. Not all of us are testing hemp, so it was good for everyone to see what it looks like for when they do get it in. We had some abnormals and the dormant seeds remaining at the end of the test to look at. Labs have found that prechill is helpful especially if the seed is within 45 days of being harvested.

AOSA and SCST cancelled the annual meeting this year, like most organizations, but unlike most others these two associations could not figure out how to conduct business, which means there are no new rules that will come into effect in October. Instead, they plan to roll all the proposals to next year. Our proposal for having number of days used for prechill was not accepted because I did not have six labs that participated. I have asked again for labs to gather data on this year’s crop and will try to resubmit by October. Please encourage your local lab to participate!

We had members participate in the RAC for ODA on revising the Oregon Seed Law for seed civil penalties.

We continued discussions with colleges in the valley about adding seed testing to their curriculums. There was not encouraging news out there for us.

We had a discussion on how to do update germinations on mixes labeled with tall fescue, ryegrass and festulolium. We reached out to USDA for advice, but they had none to give. Festulolium can look like ryegrass or tall fescue depending on parents, and you cannot visually distinguish from either. There was no strong recommendation for handling this.

We had planned to have some seed identification workshops and OSU was having a workshop as well, but all of those were cancelled due to the pandemic.

We had a discussion on more efficient ways to plant our germinations. Several good suggestions were made from standing stations to assembly line boxes.

If OSA has any projects for us to work on for next year, please let your local analyst know.

Here’s to a safe and successful harvest and shipping season. 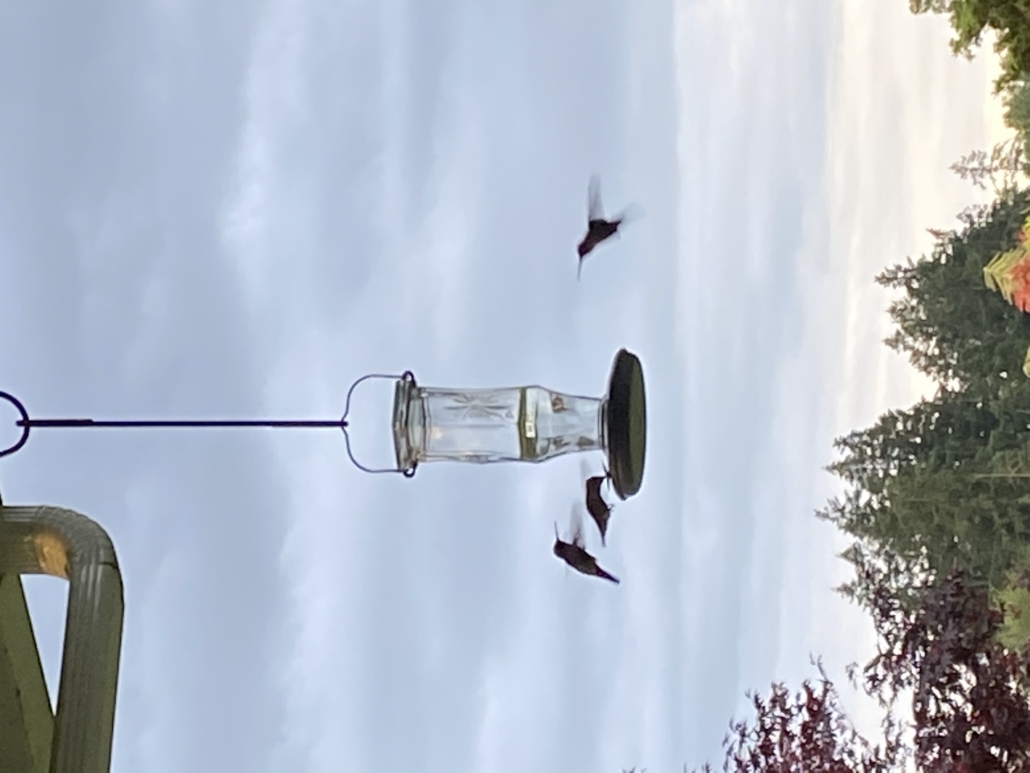 Photo taken by Sharon Davidson from her porch, watching the hummingbirds.

EASTER EGG: To show our appreciation for reading this newsletter, the first person to email the OSA office will receive a choice of 2 tickets to Enchanted Forest, or 2 tickets to Bullwinkles. Thank you for your participation!