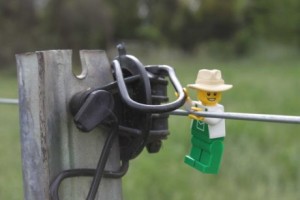 PHOTO Like our farmers, no job is too big or too small for the Lego Farmer. SUPPLIED: LITTLE BRICK PASTORAL

A tiny plastic farmer wearing a wide-brimmed hat and green overalls is doing his bit to raise awareness of Australian agriculture.

He is the Lego Farmer, 4.5cm tall and becoming quite a national, if not international, celebrity as he sows the message of agriculture in schools and via social media.

The farmer spends his day working hard, fixing machinery, baling hay, checking the harvest, planting crops or hanging out with his working dog.

And his ‘home’ is with Little Brick Pastoral, a blog started by agribusiness graduate Aimee Snowden, who lives on her family’s irrigation farm at Tocumwal, in the southern Riverina in New South Wales. 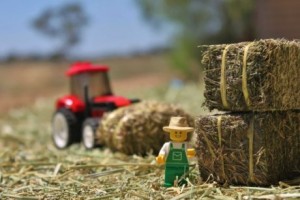 Born and raised on the land, Ms Snowden was keen to share her love of agriculture, and decided to combine it with her passion for photography and her sense of fun.

Like so many adults, the joy of playing with the colourful plastic bricks never really left her and, in September 2014, she decided to experiment with a minifigurine, or ‘minifig’, and her camera.

Ms Snowden first posed her farmer among a germinating crop and — like the crop — the Lego Farmer’s popularity has grown and grown.

“When I first started, I thought it would be a bit of fun,” she said.

“But after a little while, I realised it had a lot of potential as a way to start a conversation around production and farming in a different way.

“I don’t want farmers to be portrayed in a negative way. I want it to be positive. That is my main driver.” 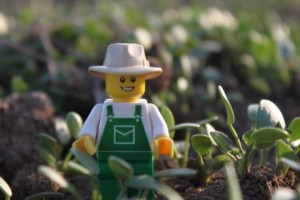 The Lego Farmer’s first photoshoot
SUPPLIED: LITTLE BRICK PASTORAL
Aimee Snowden launched the Lego Farmer in 2014 with this photo of the farmer in the sprouting clover.

Ms Snowden said using the toy enabled her to capture a wider audience — parents and their kids, city residents who may have grown up in the country, and people who loved Lego.

She said she first noticed how engaged children were with the little plastic farmer while attending an exhibition of the building blocks in Melbourne.

“We shared the story of oats with a tactile display and we found there was such an interest from kids, and even the adults,” Ms Snowden said.

“It creates interaction and a conversation with kids and their parents.”

Teaming up to teach

In September, during the Year of the Pulse, Little Brick Pastoral teamed up with the NSW Department of Primary Industries (DPI) to create a teaching resource.

Ms Snowden developed 12 agricultural characters and together with the DPI, produced On the Pulse, a kit containing classroom activities designed for primary school-aged children. 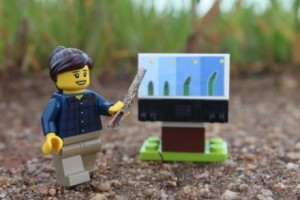 Little Brick Pastoral is hoping to be involved in developing more educational resources for primary schools.

Its goal was to connect students with where their food comes from, teach them about careers in the industry, and increase their agricultural literacy using minifigs as a storytelling tool.

Included in the On the Pulse kit:

The initial rollout of 200 kits was very popular and Ms Snowden said while feedback on its success was still to come, she hoped there would be more opportunity to work with schools.

“It was very well received. The kits went quickly and we know there is a strong interest, and the DPI would like to continue working with us,” she said.

Ms Snowden would like to see characters like the Lego Farmer highlighting the various careers in agriculture — from paddock to plate — in classrooms around the country.

“Because my background is not in education, I need to partner with people who can provide that input,” she explained.

Spreading the message and the photo love

In the meantime, Ms Snowden continues to use her blog to tell the story of farming in Australia.

Apart from increasing awareness and offering an insight into the Lego Farmer’s life, Little Brick Pastoral provides access to up-to-date information about agriculture in Australia. 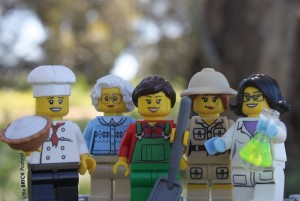 It provides industry links to resources designed to help other farmers, students, teachers and representative groups.

But the farmer’s fame is not restricted to the blog — he has almost 8,000 followers on Facebook, uses Twitter, and shares photos on Instagram where other Lego photographers congregate.

And yes, there is a female Lego farmer too, although most of her time is spent behind the scenes.

“Women play an important role in all agriculture and in fact, they make up 43 per cent of the world’s agricultural labour force,” Ms Snowden said.

She said that quite often, due to ratio and perspective, two characters in the frame could “overcomplicate” the image — and then there were the sudden gusts of wind and other environmental factors.

Ms Snowden and the Lego Farmer are not affiliated with the famous toy maker, but were involved in the #BuildAustralia campaign.