Thank you for contacting me regarding Genetically Modified Organisms (GMOs) and food labeling. I appreciate hearing from you on this divisive, yet very important issue. As a veterinarian and an organic farmer, and having spent six years on the House Agriculture Committee including two as the Ranking Member of the Subcommittee on Horticulture and Biotechnology, I’ve studied the issue of GMOs very closely and it’s something I take very seriously.

For thousands of years humans have grown or bred plants and animals and chosen the most desirable traits for breeding the next generations in an effort for them to be able to resist pests and disease and increase yields. Through modern techniques using biotechnology it has become possible to modify or isolate genes in a laboratory with great precision and speed to improve a plant’s resistance to disease, insects or drought, a plant’s tolerance to a herbicide, improving a food’s quality or nutritional value, or increasing its yield. Genetic modification builds on breeding techniques that farmers have been using for thousands of years through hybridization and selective plant breeding.

Through biotechnology we’ve been able to increase productivity and efficiency while reducing the number of inputs like water and pesticides, resulting in higher crop yields. Higher crop yields per acre allow for better land management and the conservation of marginal lands. GMOs reduce the application frequency and toxicity of pesticides in farming. According to the USDA, pesticide use has decreased with the adoption of insect-resistant GE crops with only 9 percent of all U.S. corn farmers using pesticides in 2010. Pesticide use on corn farms declined from 0.21 pound per planted acre in 1995 to 0.02 pound in 2010. In addition, herbicide-tolerant crops have enabled the substitution of glyphosate (or Roundup) in place of more toxic and persistent herbicides.

Since their introduction in 1996, the use of GE crops in the United States has grown rapidly, accounting for approximately 94 percent of soybean, 88 percent of corn, and 90 percent of cotton acreage in the U.S.  Globally, GE crops are grown in 28 countries (including the U.S., Brazil, Argentina, Canada, India, South Africa, and China to name a few) and account for 420 million acres – an area nearly the size of Alaska.

It is estimated the world population will increase to nine billion people by 2050 increasing food demand by 70 percent. With increased pressures from climate change, we will become even more reliant on the ability of the scientific community to develop the necessary technologies that will increase the yields and productivity of our crops to provide a safe and sustainable food supply. Biotechnology will become an even more important tool in the fight against global poverty and food insecurity. GM crops that flourish in challenging environments without the aid of expensive pesticides or equipment can play an important role in alleviating hunger and food stress in the developing world. This is precisely why I am very concerned about the demonization of biotechnology and the rejection by many of the supporting science behind it. We must be careful we do not discourage further scientific advancement and innovation in this critical area.

Safe and effective use of crops developed through biotechnology can help us feed the hungry and malnourished in developing nations in Africa, Asia, and Latin and South America.  For example, a lack of vitamin A in rice-based societies in developing countries leads to an increased incidence of malnutrition, blindness, disease and premature death in small children.  Vitamin A deficiency is responsible for 500,000 cases of irreversible blindness and up to 2 million deaths each year. However, dietary supplementation of vitamin A can eliminate this problem. Researchers have developed a strain of rice that uses genetic modification to fortify the grain with vitamin A. This “Golden Rice” can help combat nutrient deficiency, disease and death in developing nations around the world. In fact, Golden Rice was one of the winners of the “Patents for Humanity Award” in 2015 from the White House Office of Science and Technology and U.S. Patent and Trademark Office. Unfortunately, many of the countries most affected by vitamin A deficiency that could benefit from products like Golden Rice have rejected GM foods due to misconceptions about their safety. I don’t think the U.S. should do anything to play into those fears.

The Pew Research Center recently conducted a poll of the scientific community and found that 88 percent of scientists polled found GE food is safe to eat[1]. A wide range of well-respected international science organizations concur with this analysis concluding GMOs are no less safe than other foods. Here are some examples:

Proponents of mandatory labeling often point to the European Union (EU) who many think, incorrectly, has a ban on GMOs. To date, 75 GM products were approved for food and feed use in the EU[11] including corn, sugar beets, cotton, and soy beans. The EU has also approved two crops for cultivation: a GMO corn and a potato. The Chief Scientific Advisor to the European Union stated, “If we look at evidence from [more than] 15 years of growing and consuming GMO foods globally, then there is no substantiated case of any adverse impact on human health, animal health or environmental health, so that’s pretty robust evidence, and I would be confident in saying that there is no more risk in eating GMO food than eating conventionally farmed food.”[12]

The Food and Drug Administration (FDA) is the government agency tasked with ensuring that foods sold in the United States are safe, wholesome and properly labeled. The Federal Food, Drug, and Cosmetic Act (FD&C Act) and the Fair Packaging and Labeling Act are the Federal laws governing food products under FDA’s jurisdiction. The Nutrition Labeling and Education Act (NLEA), which amended the FD&C Act requires most foods to bear nutrition labeling and requires food labels that bear nutrient content claims and certain health messages to comply with specific requirements.

Under these laws the FDA requires that consumers have all information relevant to health, safety, and nutrition, on federally approved labels and that they are accurate, informative, truthful, and not misleading. Any food, whose composition has been changed in any way that is related to health, safety, or nutrition, must inform consumers of such changes on the label. Mandatory labeling of GE foods would damage the integrity of our food labeling laws by redefining their purpose and moving us away from a labeling system that has always been based solely on health, safety, and nutrition.

There is now near unanimity among scientists that GMOs are safe to eat and I’m afraid in the rush to mandate labeling of GE food we will unfairly stigmatize these foods and mislead consumers. The costs and negative impacts of a fifty state patchwork of inconsistent and incoherent standards would be significant. A more reasonable approach is to put in place a national standard for voluntarily labeling products free of GM ingredients. That is why I am a strong supporter of HR 1599, the Safe and Accurate Food Labeling Act which would:

I understand this issue is extremely sensitive to many people and I take their concerns to heart. I hope you realize that my approach on this issue is one based in science and my long history of being an organic farmer. Crafting a legislative solution to a difficult public policy problem is never easy task, but I feel we have achieved a reasonable solution that serves the needs of those on both sides of this issue. I believe there is room for conventional and organic agriculture and I will continue to be a voice for both here in Congress.

Thank you once again for contacting me. 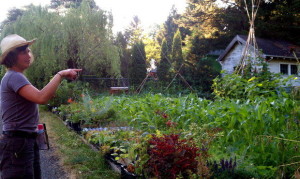 Naomi Montacre stands where she and the other employees of Naomi’s Organic Farm Supply used to operate when between locations. (Molly Harbarger/The Oregonian)

Oregon has more women involved in farming than the national average, according to recently released federal statistics.

The state-by-state numbers were released because the USDA is launching a program to foster mentoring between women farmers. The idea is to boost the number of women in farming.

Farming is in the midst of a contraction, with fewer young people entering the farming trades and older farmers aging out. Many programs are aimed at getting young farmers up and running, or providing land and capital for people who want to eventually own a farm of their own.

Oregon‘s numbers, according to the USDA:

Blue Mt. Seeds announced Sept. 14 it has purchased a seed cleaning facility from Barenbrug USA that was damaged earlier this year in a fire.

“We needed room to expand,” said Bill Merrigan, manager of the Imbler, Ore., based company. “We were right at capacity, both cleaning capacity and storage, and we were out of land to build on. We viewed this as a good opportunity.

“If growers choose to increase grass seed acres in Union County, we’ll have the facilities to handle it,” he said.

Blue Mt. plans to clean fine-leaf fescue seed and bluegrass seed at the plant after some reconstruction, and use the facility’s warehouse for seed storage.

The plant is located about two miles south of Imbler.

The purchase includes the plant’s 4-acre lot and 5 acres of land adjacent to it – acreage that connects an existing Blue Mt. seed cleaning facility and the former Barenbrug plant.

The purchase was set in motion in part by the March 31 fire that did more than $1 million of damage to buildings and equipment at the plant, including destroying a seed-cleaning line. A second seed cleaning line was only partially damaged.

Barenbrug opted not to rebuild the 50,000 square-foot facility, but to reinvest in a seed cleaning facility it operates in Boardman, Ore., according to James Schneider, CEO and president of Barenbrug USA. The Tangent, Ore., based company has since added square footage to the Boardman plant and installed a third seed cleaning line there.

“We’re not abandoning the Grande Ronde Valley,” Schneider said. “We still have a field man based there and we are contracting directly with growers there. But we are now cleaning that seed in Boardman.”

He added: “We are thankful that good came out of such an unfortunate event. Blue Mt. Seeds has always been a great neighbor, and we can’t think of a better outcome than for the sale to allow both our companies to continue to invest in future growth.”

Blue Mt. already has begun storing seed in the west end of the Imbler facility, which was not damaged in the fire, adding 2.5 million pounds of seed storage capacity to the company’s current capacity of 12 million pounds, Merrigan said.

Depending on how much of the facility Blue Mt. rebuilds, it could increase its storage capacity by another 2.5 million pounds, he said.

“We may not rebuild that facility the way it was,” Merrigan said. “We may put up a new building, or we may try and change the design of that building. That is something we are discussing right now.”

The sale leaves Blue Mt. Seeds as the only commercial grass seed cleaner operating in the Grande Ronde Valley.