Bailey Seed, Inc. of Salem Oregon announces the acquisition of Oregon Services Inc. of Harrisburg Oregon. Oregon Seed Services Inc. is a closely held Oregon Corporation that has been an active wholesale marketer of grass seed produced in Oregon since 2004. Bailey Seed, Inc. is a regional marketer of grass seed, cover crops, small grains, and forage products, that was started by Dick Bailey, a well known life-long Oregon Seedsman in the 1980s. The sales staff of Oregon Seed Services will continue to market their current OSS product line, and will assist Bailey Seed in establishing a greater national presence in the seed industry.

According to Troy Ralston, VP of Bailey Seed, “We have done business together for some time and there is an unusual amount of synergy between our two companies that will make the merged company greater than the parts.” Larry Dean, former CEO of Oregon Seed Services will continue to do sales and customer relations and product development for the merged company. He commented, “as I get older, it is a privilege to get to focus on the parts of the industry I most enjoy and be able to choose when I phase down and when I retire”

The two companies have history together that reaches back to the 80s and early 90s with two historical seedsmen who were collaborative partners, Dick Bailey and Jimmy Jenks. “Lee Ralston bought the operations of Bailey Seed from Dick Bailey prior to his passing, and a few years later I followed Jimmy Jenks as sales manager for Jenks Seed Connection when Jimmy sold his company and retired. Now, Lee Ralston’s wife and son is acquiring my company. Life takes interesting turns” stated Larry.

Check out the video here! 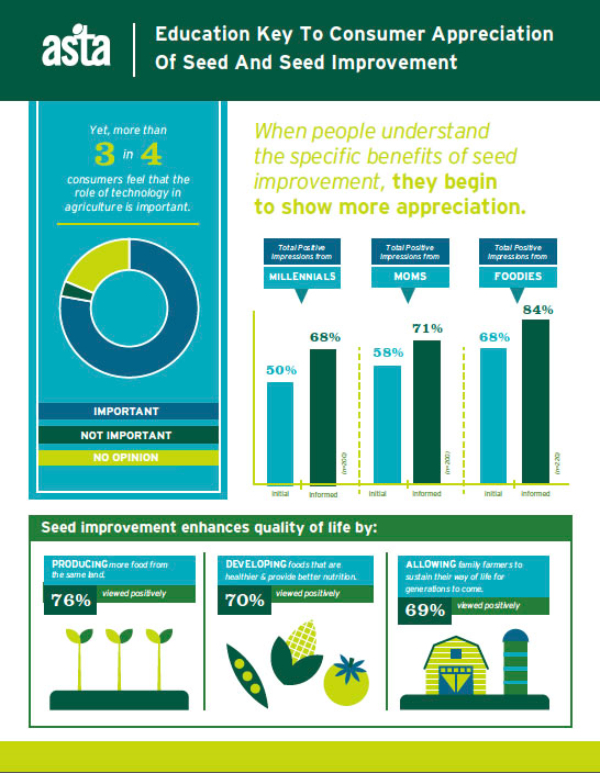 Today, the American Seed Trade Association unveiled the results of a new survey that focused on consumer perception around seed and seed improvement.

“The agriculture industry recognizes the significance of seed innovations and that many things which improve the quality of our lives can be traced back to the seed,” said Andy LaVigne, ASTA president and CEO. “But when we reach beyond the agricultural community, we realize we have work to do in educating people about the value of seed and seed improvements. Our research results revealed that the work of the seed industry is generally undervalued among educated consumers. Yet, those same consumers believe that the role of technology in agriculture is important and vital.”

Lavigne explained that when time was spent with the consumers surveyed and additional information shared regarding the specific benefits seed improvements, consumers began to show increased appreciation in understanding the impact of seed improvements and innovation.

As part of the survey process, consumer were told that seed improvements can do some of the following:

“With this new information, our consumer audience agreed that the benefits of seed improvement help all of the public,” Lavigne said. “We found that total positive impressions across all consumer groups increased and with impressive numbers.”

The survey target millennials, moms and foodies. Among those groups, positive impressions increased by 18 percent, 13 percent and 16 percent, respectively.

“These are all extremely encouraging results as we move forward with our messaging,” LaVigne said. “As one of the oldest trade associations in the country, ASTA is uniquely positioned to help educate consumers about seed improvements that are providing an increase in solutions among increasing demands on food, feed, fuel and fiber by growing more.”

To build upon the survey results, LaVigne announced that ASTA will undertake a three-year communications effort to reach consumers about the importance of seed improvement. “Our hope is to increase awareness among consumers about the diversity of the seed industry, about the value of the crops that are grown from our seeds and the food that is produced from the seed, and the impact that it has on our daily lives now and into the future,” Lavigne said.

The original article published on Seed World can be found here.